Inspiration » Drop By You » Lounatuulen Tiira 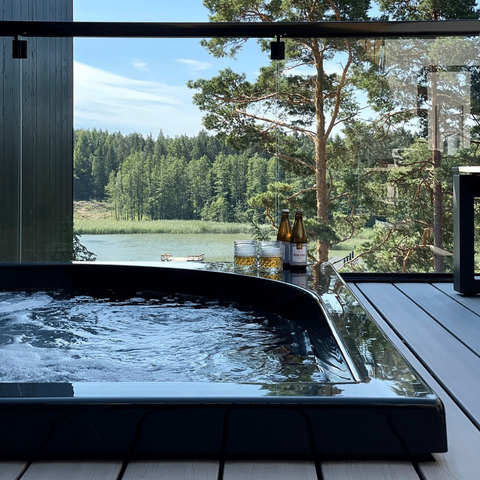 "Lounatuulen Tiira" is one of the entities of two ecological semi-detached houses, where the residents can enjoy the surrounding nature and the sea view.

NAANTALI HOUSING FAIR AS PART OF THE HISTORIC STAGE

The summer 2022 Naantali Housing Fair is located in the historic landscape of Lounatuuli, which have been inhabited since the Middle Ages. Lounatuuli is built on the beautiful island of Luonnonmaa, which was originally consisted of two separate islands. As a result of the rise in the ground, Luonnonmaa became a cohesive island where people were able to travel by water. Previously a member of the Naantali rural municipality was annexed to the city in 1964.

There is also a summer home for the President of the Republic, Kultaranta, which was transferred to the state in 1922. There is also a beautiful park with art exhibitions in the area. Naantali has many guided tours in the Old Town and the monastery church. So you can well combine your visit to the fair at the same time with a fascinating local history. The Naantali Museum and the Casa Haartman artist's home are also worth a visit. Families with children are attracted by summer after summer the Moomin world.

During the summer fair, Naantali is also pulsating other events and delightful places to attend: you can attend traditional event of ”Unikeonpäivä” at the end of July or jump on the bike's back and trap the area's interesting ring routes. So make enough time for your visit and enjoy the diverse offerings of Naantali at the same time.

The Housing Fair also serve a diverse set of different destinations for exploration. This year, the area is a great entity in a variety of styles, interesting destinations, traditionalism and trends, various materials and surfaces, and stunning yard implementations in line with nature themes. The source of the fair's inspiration has been the surrounding archipelago and a wooded rocky landscape.

"Lounatuulen Tiira" is one of the entities of two ecological semi-detached houses, where the residents can enjoy the surrounding nature and the sea view. Heikki Hallanoro, who moves to the "Lounatuulen Tiira", says he has designed his apartment within the finished floor plan and made the appropriate changes according to his wishes. “There were frames on behalf of the developer, which we were able to influence ourselves and choose interior design solutions that are suitable for our wishes,” says Hallanoro. However, at the fair will still be seen a house that will be transformed to the family's own home with individual interior solutions and styles after the fair.

The semi-detached houses are interconnected by a carport and the terraces have a concrete wall in between. For the ”Neljäs Tiira" fair house, the Drop pool was selected as their outdoor jacuzzi and that way the same pool also came to the house of Hallanoro. “There was a reservation for the pool and we decided to get one. Next door’s Päivi and Jouni Kaivola had acquired the Drop pool on their terrace and we listened to their recommendations, ”says Heikki Hallanoro. Päivi Kaivola, the future resident of ”Neljäs Tiira" apartment, is an interior design professional who has worked in interior design for over 20 years. “We trusted Päivi for the opinion and got a similar pool for our own terrace,” Hallanoro continues. 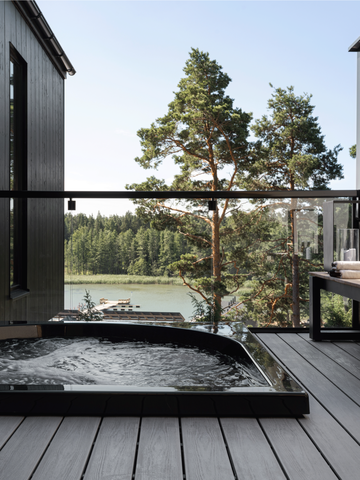 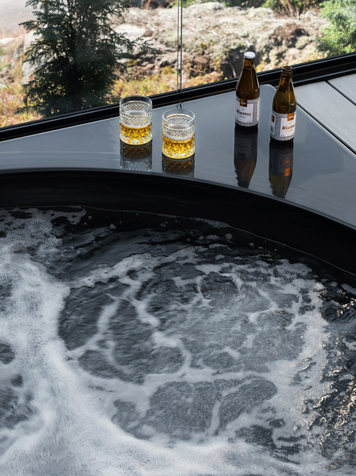 PLAN THE PLACEMENT OF THE POOL CAREFULLY

It is advisable to carefully plan the location of the pool for comfort and safety. The location should be chosen to be as open as possible, as the leaves and other dirt dripping from the wood will otherwise easily end up in the pool during the bathtub moments. When installing, it should be noted that the pool must not be lowered to the top but should be installed and kept on its body.

“We definitely wanted the pool to be completely immersed along the edges to make access as easy as possible. It was also important to us that Drop is a Finnish product. If there were any problems ever, I like that help is close when needed, ”Heikki Hallanoro tells about the important things when choosing a pool.

The pool choice was the gray Drop Vuolle with a massage site for four and a total of 32 massage nozzles. At the same time, the pool can accommodate eight people. Like other Drop pools, the Vuolle model is designed and manufactured in Finland and has the Avainlippu sign.

When planning the location of the pool they had to take into account the location of the house on the rocky slope, and because of that the terrace is located up. The house is one-level and partly stands on the pillars. The Drop was completely immersed, which was easy to succeed thanks to the free space under the terrace. The service hatch fit also in the same space. The pool was wanted to place for a compact cooling terrace, which can be reached directly from the sauna department.

Drop pools are delivered flexibly to the destinations by agreement. Hallanoro says he agreed with Drop about the delivery very flexible and the process went smoothly. “I called the Drop seller and ordered the pool. I didn't have to do anything else and things were very smooth. At the agreed time, Drop appeared on the terrace, ”says Hallanoro with satisfaction. "There is nothing to complain, everything has gone as agreed," Heikki Hallanoro continues. 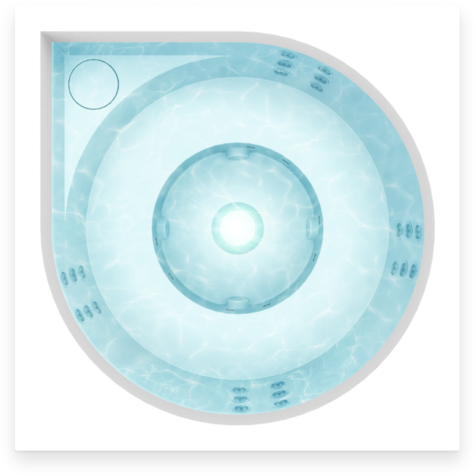 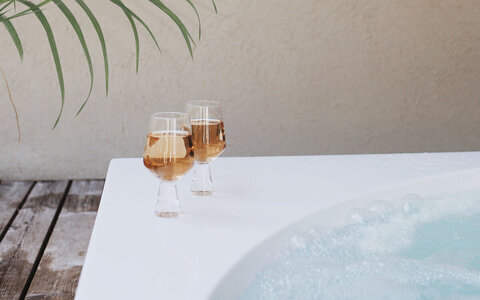 Did you know that you can use the spa pools from Drop Design Pool all year round? They are designed for our Nordic climate and can, in fact, be used in all seasons.